Maui Plant of the Month: Silversword From plumeria trees in full, blushing bloom to the bright hues of hibiscus, Hawaii holds some of the most magnificent plant life on Earth—and there are few better places to view the beauty of the islands’ natural garden than on the slopes of Maui’s Haleakala. 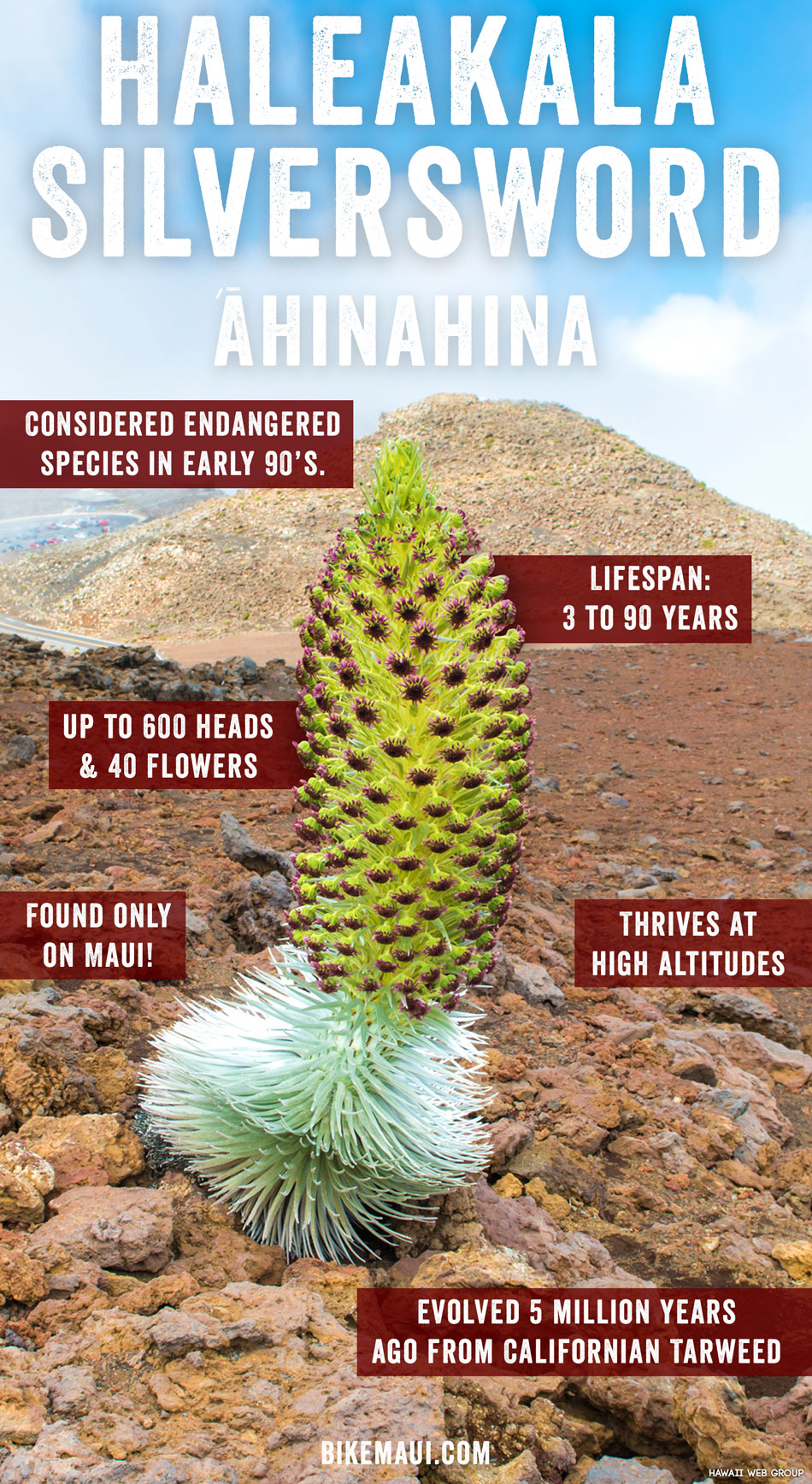 Mahalo to Haleakala Bike Co. for putting together this fascinating article for us!

Ascending from sea level to Haleakala’s peak takes travelers up 10,023 feet and through microclimates as diverse as rainforest and alpine desert, each complete with their own natural wonders.

Of those is the unmatchable Haleakala Silversword—a volcanic subspecies that grows nowhere else in the world. The ʻāhinahina—translation: gray—hails from the sunflower family, though you won’t see a dash of sunshine yellow on this alienesque creation.

Its gray swords open towards the sky, with each spike bristling with distinct silver hairs. Consider it the silversword’s way of saying mahalo to the stark landscape it calls home: this succulent flora thrives in the high altitude and chilling temperatures, where its thick skin and coarse hairs protect it from sunburn, thirst, hypothermia, and the mighty winds that sweep across Haleakala’s summit. While we tend to associate most plants with rich soil and ample hydration, silverswords flourish on the brittle volcanic cinder.

And flourish they do: the lifespan of a silversword ranges from three to a whopping ninety years. In a dramatic departure from the world, the mostly monochromatic plant shoots up a deep purple, six-foot flowering stalk during senescence before it reaches its demise. But this isn’t just a final, theatrical salute to its life on Earth: each seed-rich stalk carries up to 600 heads and 40 flowers, which is then pollinated by volcanic bees. Death by childbirth? Perhaps. But its progeny arrives on the planet in a stalk with considerable armor: sticky hairs attached to the maroon-flowered shoot shield it from potential damage from non-pollinating insects. The Haleakala silversword has a history nearly as rocky as the volcanic desert upon which it’s found.

Prior to the protection offered by the government when Haleakala was named a National Park in the 1930s, some visitors were so enamored by the urchin-like plant that they tore them from the ground to take home as souvenirs, use as kindling, or add a unique spin to flower arrangements. Coupled with munching by feral pigs, goats and cattle—as well as environmental changes, vandalism, invasive species, and the damage done to its delicate roots by wayward feet—this rendered the largely defenseless silversword an endangered species in 1992. Conservation efforts, including growing silverswords in greenhouses to supplement the wild population and instilling walkways at the park, have aided in its survival, with a decimated 4,000 plants reaching 65,000 by 1991. Add a dearth of sultry trade winds to the list of hazards: the tropical breezes that operate as nature’s air conditioning for most locals has a radical effect on the silversword’s ability to capture and store water. Today, the beauty of the rare plant isn’t just a feat of nature but also a tremendous achievement of human endeavor.

With conditions that can range from freezing to raining to the mid-80s in the course of 24 hours, and necessitating extensive camping and hikes of up to ten miles per day, the scientists involved in the silversword’s endurance deserve more than a round of applause. It is these scientists who learned that the silversword, which is generally found at elevations of 6,900 feet or more, now does better at higher altitudes, much like the American pika—the first non-Alaskan mammal to be considered an endangered species due specifically to global warming that has moved upslope on the US mainland in order to survive. Should the silversword’s decline continue, it’s bound to have an impact on several of Hawaii’s few endemic species, including a Maui moth that feeds on its spiky flowers and several of its other natural pollinators. As for those spiky flowers: well, they’re not just nature’s flair.

The burnished hairs that encase their narrow leaves function as a reflector oven, in which its parabolic form distills the sunlight’s warmth to direct it towards its growing point—a toaster that can amplify the temperature by an impressive forty degrees. In another brilliant twist of nature, the silversword adapted to Haleakala’s bone-dry climes by developing gelatinous leaves filled with air pockets that can store substantial supplies of water during interludes between rains—a characteristic that’s shared by its cousin on the Big Island, where the Mauna Kea silversword, a once-dominant, pink-blooming species known as the crown jewel of Hawaii, now faces extinction. Believed to have evolved roughly five million years ago from the California tarweed—a Nor Cal sunflower distinguished in part by its resinous scent—the silversword arrived on Hawaii’s shores across thousands of miles of oceans to colonize the islands.

Indeed, this is a plant that has witnessed the natural and manmade advancements of Maui firsthand, reaffirming novelist Jack London’s observation that Haleakala is a genuine “workshop of nature still cluttered with the raw beginnings of world-making.” Setting out to see this wild wonder?

The enclosure at the Kalahaku Overlook offers a glimpse at this unusual gem, while the Leleiwi Overlook, past Mile Marker 17, grants a view of silversword blossoming on the otherwise desolate shale. But don’t get confused by two other plants that resemble the Haleakala silversword: the aptly-named green sword clusters in fog-dense areas in Haleakala National Park, while a low-growing shrub known as the dubautia menziesii prospers on its windswept slopes. When you do locate the grand silversword, you’ll understand why Haleakala is otherwise known as wao akua, or a sacred place of the gods. And as for listening to its leave rustle: you’ll hardly have to perk your ears, considering that acoustic experts have discovered that the ambient sound levels within the crater are at the very verge of human hearing—explaining why you can hear your own pulse, and perhaps even that of this miraculous, formidable flower.